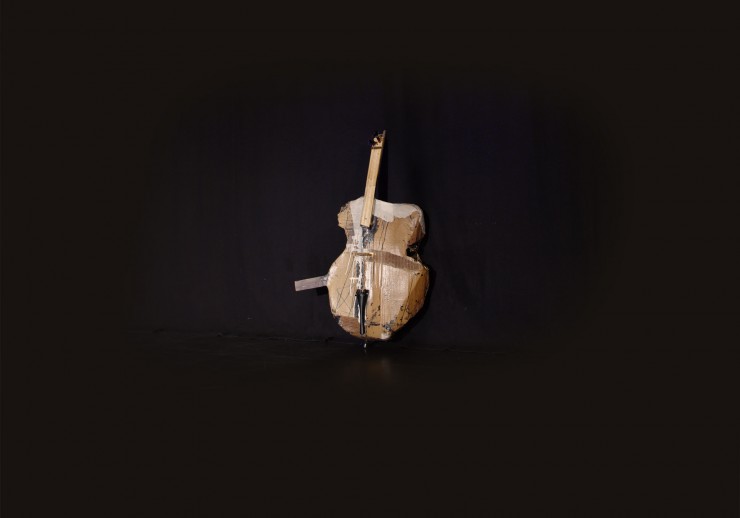 At first glance, Otto is a strangely formed cello: half sculpture, half instrument. However, Otto is also a fictitious person who might have been born at the end of the 19th century, or 1000 years ago, or perhaps even 1000 years from now. He represents an ideal, because he has a special talent: creating beauty out of nothing amidst dire times. Otto is many different people and nobody specific.

Where does Otto come from?

The first time I met an Otto was at Cité de la Musique in Paris, where he was on display. Ottos may also be found in various photographs taken of soldiers with their home-made musical instruments in the trenches of WW1. These were not military instruments but violins made out of wine crates, cellos made from caissons, and music stands made from branches: primitive in the regular world, but very sophisticated for a battlefield. When I saw these picture I was deeply moved, mainly because we have something in common: the music. For the soldiers, playing music might have been a rare moment of joy before they had to return to the front and fight a pointless war. What struck me most of all was the huge contradiction between the horror and the beauty.

Although I have never been in a place even remotely like these trenches, I could picture myself being there. The instruments made that connection possible. The soldiers’ fascination with their instruments never went away. We take the availability of music and the arts for granted. In extreme times, access to such things takes a little more effort. The men in the picture represent the true value of art. They are Ottos.

How did Otto come to life then?

The artist Aldo van den Broek shares a certain similarity with the soldiers in the pictures: the ability to create something out of apparently nothing. Aldo primarily works with found objects. In fact, one could say he works with garbage. His practice is based on the idea that one does not need much to create something great, an idea at the heart of these trench instruments. In addition, Aldo’s unique aesthetic perfectly matches the gloomy atmosphere of the WWI photographs. So we met and started to create our own version of a hand-made cello built by laymen. The result is the current Otto.

Having constructed the cello sculpture Otto, the next step was to find appropriate music to be played on it. The origin and symbolism of Otto make it impossible to use existing pieces. We believe the object, content and sequence of the presentation are inseparable. From the very beginning, it has been our goal to come up with a framework that allows us to create not only a collection of pieces, but a whole experience that takes into account all the various aspects that lead to the creation of Otto.

We decided to go back to where we started: the individual. A human Otto. How did he end up in the trenches presenting his instrument like this? Perhaps he felt a sense of euphoria in the beginning, then pure horror, then despair and a longing to return home. Imagining this allowed us to create a sequence of events with a very specific atmosphere for each part. Recently we started working with composers from all over the world to create a unique piece for each episode. We are in the middle of the process, so it is not 100% clear what it will look like in the end. We’ll keep you posted.

So what is this all about?

To make one thing clear, we are not aiming to reenact the horrors of war. It is impossible to contribute anything meaningful by simply recreating the events. Instead we take fragments familiar to us and abstract them. The images and sounds are transformed into poetry. We create a performance and put it on stage. We do this to acknowledge the people who create something beautiful despite dire circumstances.

If you think this is absurd, so is an orchestra in the trenches.