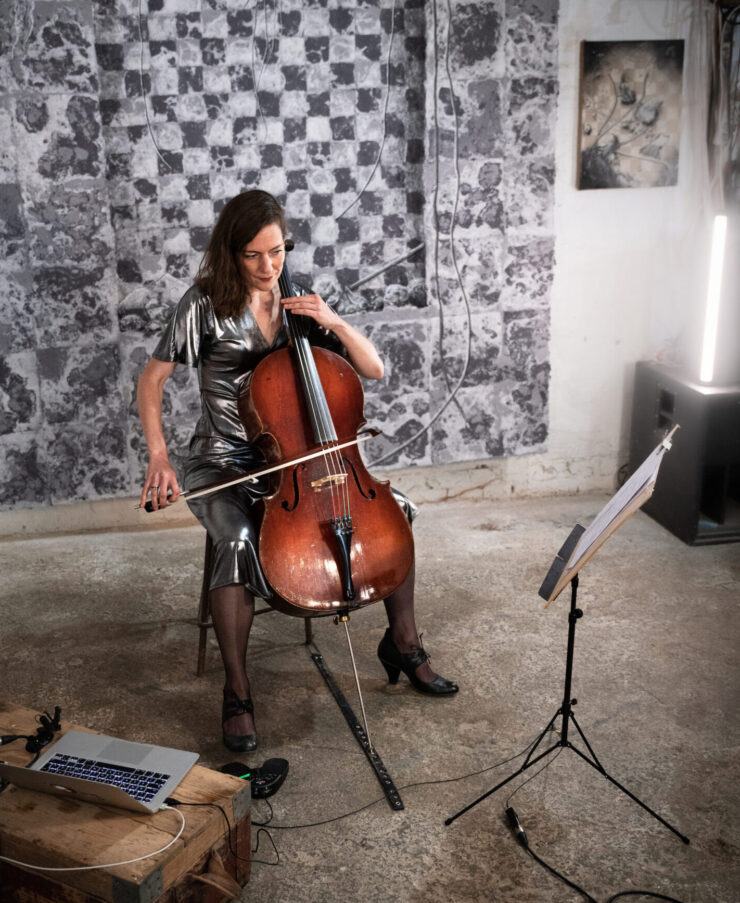 Exchanging with international artists is an important part of my work. Two years ago, I was selected as a cellist to participate in an artistic residency at Treasure Hill Artist Village in Taipei. My aim was to discover the contemporary music scene in Taiwan and to develop a project with a local composer there. Due to the pandemic and the closure of the borders, this visit was postponed twice.

However, during these two years of waiting, I was able to meet the Taipei-based composer I-lly Cheng. We were able to exchange on an artistic and musical basis of course, but also on a personal level via online platforms. Thanks to a grant from the Taiwanese Ministry of Culture and Arts, we were able to record our first joint piece: Yours Mine (2021).

At the same time, the idea of working on a piece for cello and electronics was born. The piece “Ceasing time” for cello and electronics, which I-lly composed while studying in Europe but never completed, seemed predestined.
For a grant of the “Ministerium für Wissenschaft, Forschung und Kultur” (MWFK) of Baden-Württemberg, I decided to work on this piece with I-lly and to record it.

Before studying composition, piano and live electronics, I-lly also learned to play the cello. It was therefore natural for her to turn to this instrument during her composition studies at the Conservatorium van Amsterdam. She worked on a first version of “Ceasing time”, which she performed herself. However, her wish was to perfect this piece and to hear it played by a professional performer. This is what we worked on together.

I-lly writes about the piece:

“The continuity of time: the existence of music ceases every moment and is every moment renewed. In this piece, live electronics use freeze effects to extend the playing notes of the cello into stretchable layers. In contrast with the first spectral texture part, the second part turns into a short rhythmical scene, building layers like the first part, however, the texture becomes totally different. The last part back to the cello’s beautiful melodic quality, along with extended chords from the first part, ending in a sublimate atmosphere.”

This piece is thus about the perception of time. Electronic effects are used to “freeze” the sounds of the cello. Time seems to be divided into two layers that overlap and merge: the time of the cellist, who moves at a certain pace in the piece, and the “frozen” time of the notes she played, which leave electronic sound traces.

I-lly thought at first that an external person would activate the cues of the live electronics part. But we finally decided that I would take on this role myself, for a more direct and flexible musical flow. I-lly then prepared a Maxpatch to allow me to do this using a pedal connected to my computer. After some adjustments and a technical and musical learning phase, I was ready for a video recording.

For the recording I asked my colleagues Remmy Canedo for the sound and Luis von Wolff for the video. The “Stuttgarter Kollektiv für aktuelle Musik” kindly supported the project by providing us with the necessary equipment.

It was important to me to give the piece an appropriate visual context: abstract but poetic, sensitive and linked to the concept of time.

I approached the visual artist Clemens Schneider, who made his studio available for the video shoot. Clemens paints and draws on large paper formats that he produces himself in his studio in the Bohnenviertel in Stuttgart. His artistic method as well as the aesthetics and sensibility of his works resonate with the piece “Ceasing time”:

“In his works, spaces, walls, surfaces, nebulous concentrations, {…} like cosmic worlds or cloud formations emerge. {…} everything you see in his pictures are apparitions that could have been like this or completely different. Everything is in flux. {…} In his paintings, Clemens Schneider strives for a situation comparable to those that arise with the sounds of certain contemporary compositions. Here in contemporary music, i.e. outside the visual system, he finds the most important guidance for his painting processes. Music accompanies Clemens Schneider in each of his paintings, compositions by Morton Feldman, John Cage and Györgi Ligeti, whose piece “Clocks and Clouds” also gave {its} name to a series of works.“

Dr Tobias Wall about the “Clocks and Cloud” series of works on galerie-tobias-schrade.de

The work on the piece “Ceasing time” fits naturally into my work as a cellist and performer, seeking exchange and cooperation with contemporary and international composers. In particular, it was a concrete and fruitful step in my existing collaboration with I-lly Cheng. This project has indeed allowed us to stay in touch and to develop a clearer understanding of our respective artistic language. It has also been a final digital working step before we finally see each other in person during my residency at Treasure Hill Artist Village in Taipei from July 11 to September 10, 2022.

We plan to perform the piece “Ceasing time” during this residency.